Prior to its recorded history, the land of Western Pennsylvania (that would later become Indiana County) was characterized by the immense forests that filled the rolling hills of the Allegheny Plateau. The sparsely populated area served as a hunting ground and was host to a network of footpaths linking larger Native American settlements outside of the territory. The recorded history of Indiana County begins around 1727, when James LeTort, a French Huguenot trader, set up a trading post for the Native Americans near what is now the town of Shelocta in the western part of the County. 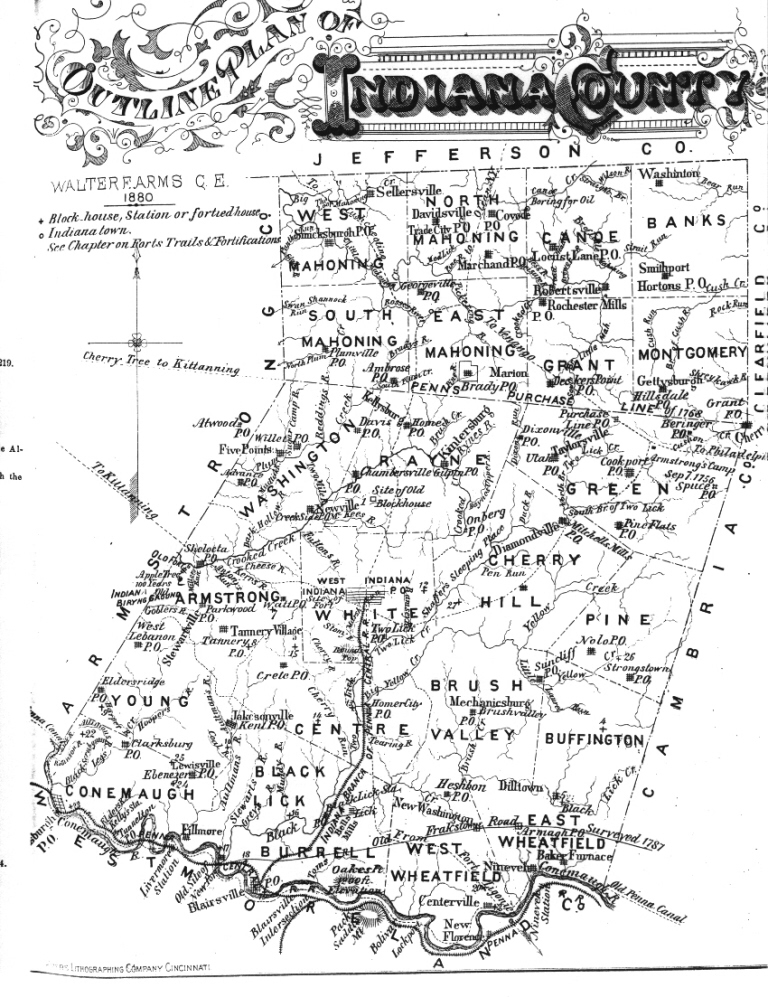 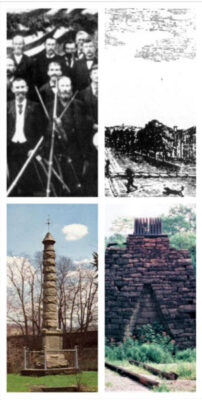 Two significant treaties in the late eighteenth century shaped the territory into an attractive option for pioneers looking to start a new life away from the crowded eastern portion of the state. The southern part of the County was purchased from the Iroquois Six Nations in 1768 in the first Treaty of Fort Stanwix by Thomas and Richard Penn, sons of William Penn. The line of this purchase, extending across the center of Indiana County, is known as the Purchase Line, and is commemorated today by a monument in the town of Cherry Tree, marking the corner of the Purchase. In 1784, the Penns signed the second Treaty of Fort Stanwix with the Native Americans and purchased the territory north of the Purchase Line, paving the way for the creation of Indiana County.

With the western portion of the state now open for settlement, early pioneers made their way to the frontier to make “tomahawk claims” and build a future away from the thickening population centers of eastern counties. Travelers would often make their way to the area using the Kittanning Path, a Native American trail which roughly parallels U.S. Route 422 through Indiana County. This route was renamed the Armstrong Trail and is now preserved by The Armstrong Trail Society, and a portion in Indiana County has been marked with signs and used for hiking and nature study.

Territory` located in Westmoreland and Lycoming Counties, north and south of the Purchase Line, was joined on March 30, 1803 to form Indiana County as part of Pennsylvania House Bill No. 44. Several months later, discussions began regarding the location of the county seat. Thomas Gilpin wanted to create Gilpinsburg northeast of present-day Indiana; however, George Clymer of Philadelphia (a signer of both the Declaration of Independence and the United States Constitution) preferred that his land known as the Glade Tract be used and proceeded to donate 250 acres of land in the center of the County. In 1805, officials selected Clymer’s land and the town of Indiana became the county seat. By 1806, the official business of the County was transferred from Greensburg and three years later the first Court House was built.

The earliest transportation systems in Indiana County were developed by Native American inhabitants and comprised of footpaths by land and river navigation via canoe on the larger streams and tributaries, where water levels were high enough. The main east-west trail through Indiana County was known as the Kittanning Path, and the north-south trail was known as the Catawba Trail. Both intersected in what later became the town of Indiana at a location known as Shaver’s Spring, the current home of the Indiana University of Pennsylvania Student Union building. 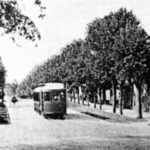 Native American trails and settlers’ paths gave way to more modern transportation systems by the late eighteenth century, and as early as 1771, some of Indiana’s streams were deemed “public highways” by the Pennsylvania Legislature. Around 1790, “Frankstown Road” became the first State road to pass through Indiana County and by 1807 it was improved, and tolls were charged when it became a turnpike. Prior to the construction of bridges in the county, there were ferries and fords, although they were often rather muddy affairs.

During the 1820s and 30s, the Canal Age established the Pennsylvania Canal to link Philadelphia and Pittsburgh through a system of waterways and railways. The Conemaugh River (the southern border of the county) was an important link in the section from Johnstown to Pittsburgh. By 1829, the first canal boats were passing the Indiana County towns of Blairsville and Saltsburg and by 1834, the canal was opened its full length. Bow Ridge near the present-day Tunnelview Historic site boasted the third tunnel built in the nation and the only place on the canal with a tunnel and aqueduct next to each other. The railroads meant the end of the Pennsylvania Canal. In 1857 the State sold the main line canal system to the Pennsylvania Raiload and in 1860 the canal from Blairsville to Johnstown was abandoned, with the section from Blairsville to Saltsburg following suite by 1865.

Within 30 years of its construction the canal was replaced by railroads, which left the State government almost bankrupt as a result of the canal-building fever. The first railroad built in Indiana County was a branch of the Pennsylvania Railroad from “Liebgood’s Summit” in Westmoreland County 2.8 miles across a bridge over the Conemaugh into Blairsville. The site was later known as the “Blairsville Intersection” and is today known as Torrance. On December 10, 1851, the first locomotive crossed into Indiana County and by early 1852 the Blairsville Branch opened 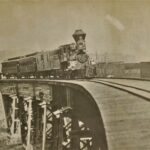 for general passenger and freight traffic. From 1853 to 1856 this line was extended north to Indiana, with the first train to the town arriving in May of 1856. Rail travel grew in popularity, with additional lines making their way into the County. The railroad maintained its popularity for over a century, until the automobile slowly took its title as better road systems developed.

Society in Western Pennsylvania grew from a network of humble homesteads and forts dotting the terrain, to numerous bustling small towns filled with individuals looking to start a new life on the frontier. As the new United States government opened the territory for settlement, soldiers who fought in the American Revolution were awarded land for their service and with that the promise of a new life and the opportunity to grow wealthy. With its southern expanse situated on the primary trade route of the Pennsylvania Canal, Indiana County quickly attracted skilled tradesmen looking to meet the needs of the rapidly growing populace. With that growth came education, arts, and the first county newspaper in 1814.

In the 1830s and 1840s a strong anti-slavery movement gained traction in Indiana County, with the Center Township Anti-Slavery Society organized in 1838. It was not long after that an abolition newspaper, The Clarion Freedom, was established in 1843. Local sentiment and geographic location led to the County becoming one of the main lines of the Underground Railroad and many prominent citizens risked their lives by harboring those seeking freedom.

During the Civil War, Indiana County sent several regiments of troops to fight for the Union. Men from Indiana took part in historic battles, from Gettysburg to Antietam and several of them received the Congressional Medal of Honor for their bravery. The war saw 3,680 residents serve, or roughly 11 percent of Indiana County’s population at the time. The shared experience of the conflict spurred the formation of numerous veterans groups, who carried on the legacy of their time in the service.

Faith was an important aspect of early county life, evident by the numerous churches and congregations that popped up across the towns and countryside. Bethel Presbyterian Church is believed to be the oldest Protestant Church and dates to 1788. The oldest Catholic Church is St. Patrick’s in Pine Township, built in 1827, but the deed for the land was given in 1806. Many churches dot the landscape and their cemeteries memorialize the early inhabitants of the County.

Indiana County valued education from its founding, with the first schools and academies opening within a few years of its inception. In 1855, a Normal School for training teachers was begun in the old Indiana Academy and in the basement of a church. Indiana State Normal School was established in 1870 and became a four-year State Teacher’s College in 1927.  In 1965 the Normal School became Indiana University of Pennsylvania, now a significant cultural and business asset for the County.

Economic success and development during the mid to late 1800’s spurred growth across the county. Ornate churches, businesses, and private residences were a byproduct of this prosperity, with a handful of those buildings still visible today. Some of these include Ebenezer Church, Bethel Church, the Silas M. Clark House, the Mitchell House, Historic Downtown Indiana, and the Smicksburg Amish Settlement, and two National Guard Armories. Browse a map of history sites in Indiana County to learn more.

Industry and agriculture played a large part in the early development of Indiana County and was closely linked to the surrounding land and forests. The fertile landscape was ideal for farming and ripe with natural resources. The first enterprises focused not only on mining these resources, but processing them for human consumption. Grist mills, sawmills, and blacksmith shops established themselves wherever there was the need and the natural resources were plenty. In addition to agricultural activity, the extraction of vast resources of salt, coal, natural gas and timber guided Indiana County’s economic growth and cultural development and has profoundly shaped the lands and people of the County. 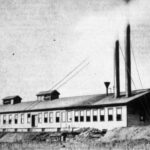 In the early 1800s, the County’s first major industry was manufacturing salt by evaporating the mineral from water pumped from wells. It took about 80 gallons of brine to produce one bushel of salt. Prior to its discovery, all salt had to be imported to Indiana County from locations in New England and Kentucky. The local production made the resource readily available and affordable to residents. The salt boom in the southwestern part of the County died out by the end of the century, but left behind an economic legacy and accounted for the name of the town of Saltsburg.

Bituminous coal was dug from exposed outcroppings as early as 1795, but there is no record of the date or location of the first mine. Coal mining soon rivaled farming as the backbone of the County’s economy. By 1905, the production of coke (a coal product used in iron smelting) became a major industry with the construction of beehive ovens at Ernest and Coral. Several iron furnaces were built in the 1830’s and 1840’s, but ceased operations when the timber that supplied charcoal gave out—a necessary ingredient in iron production.

As natural resources dwindled, the manufacturing industry developed. The late nineteenth century saw the local glassworks and ironworks flourish, with products pouring out of the County. In 1914, the construction of the McCreary tire plant in Indiana added another export to the County. by 1922, 46 types of products were made or produced by 197 industrial establishments valued at $32,195,000, which would equate to about $500 million today.

A disastrous St. Patrick’s Day flood in 1936 devastated the region, including parts of Pittsburgh. In 1946, the Army Corps of Engineers began constructing the Conemaugh Dam on the Conemaugh River near Blairsville. Several towns were demolished and moved, and two railroad tunnels and the old Pennsylvania Canal tunnel were sealed to make way for the giant project. The work took seven years to complete and is the largest flood control dam in the Allegheny River system.