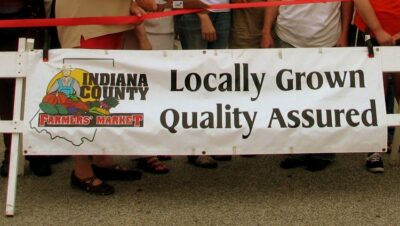 Farm markets are popular in the County and several operate during the summer, including the Indiana County Farmers Market (Wednesday / Mack Park and Saturday S&T Bank Parking lot) and Yarnick’s Farm Market.

These markets offer fresh local produce from some of the many farms in the area. Some of the items for purchase include vegetables, meats, dairy products, soap, and gift items.

Agriculture plays an important role in the landscape, culture, and economy of Indiana County. Much of the County has prime agricultural land that supports productive farming, which is one important component of the County’s economic vitality. In Indiana County the average size of farms hs increased from 122 acres in 2007 to 156 acres in 2012 which reflects an almost 28% increase in farm size. Pennsylvania also has several laws and regulations to advance the protection of agricultural lands, including the Pennsylvania Agricultural Land Preservation Policy, Agricultural Security Area Program, and Right-to-Farm Law.

The US Department of Agriculture (USDA) National Agricultural Statistics Service (NASS) conducts a Census of Agriculture every five years. The current trend is decreasing based on information provided in the new NASS updates.  From 2007 to 2017, there has been over a 38% decrease in the number of farms with a 21% decrease in total acres farmed.

The NASS definition of a farm has remained the same since 1974, but activities included as agriculture have undergone modifications in recent years. In previous agriculture Censuses, farms were classified by the Standard Industrial Classification (SIC) System. In the years since 1997, NASS adopted the North American Industry Classification System (NAICS) and new industries were added.

The presence of farming communities creates a rural landscape composed of farm fields, covered bridges and horse-drawn buggies that exist side by side with urban landscapes in the region. Despite a shift in agricultural employment with respect to the overall workforce, agriculture remains an important part of Indiana County’s economy, its way of life, and its cultural heritage. 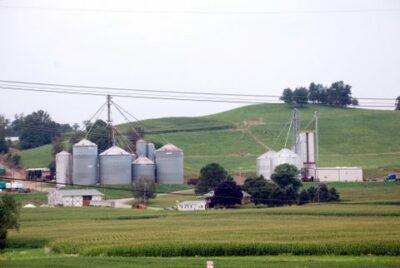 Soils are evaluated for their ability to support agricultural activity. Soil classification establishes the limits of agricultural production in certain soils. For example, Class 1 soils are capable of producing the very widest range of crops. Soil and climate conditions are optimum, resulting in easy management. Class 2 soils are capable of producing a wide range of crops. Minor restrictions of soil or climate may reduce capability but pose no major difficulties in management, and so on through the classes.

Indiana County has over 366,080 acres of arable land classified as Grade 4 or above. In addition, there are over 66,000 acres reserved in “Agricultural Security Areas” to facilitate agribusiness.

At last count, 42 Indiana County farms have been recognized by the Pennsylvania Department of Agriculture as Century Farms–those which have been farmed by the same family for 100 years or longer. Indiana County has been known as the Christmas Tree Capital of the World for two generations. Christmas tree farming began here in 1918, and by 1960 more than 200 growers were selling in excess of 1 million trees annually, according to the Indiana County Christmas Tree Growers Association.

In addition to corn, soybeans, hay crops, and other rotational production, a number of local vineyards and wineries operate in Indiana County.  Most grow their own grapes and then bottle and sell the wines, a number of which are award-winning. They offer wine for consumer purchase, and some host tasting events, rent space for parties, or sell wine-making and beer-brewing supplies.

In addition to supplying traditional agricultural products, there are economic growth opportunities associated with strengthening other natural resource-based businesses, such as those using alternative energy practices to foster a sustainable economy.

The conservation and use of forestry resources, fisheries, agriculture, along with recreation and tourism, may also generate growth opportunities for local agricultural businesses.

Consumer demand is increasing for locally grown food, and local farmers can benefit from changing patterns in food shopping. Farmers also can reinvest food dollars into the local economy.

“Buying local food creates economic prosperity in a region,” according to the National Sustainable Agriculture Coalition.  Read the full article on local food and the economy from TribLive News.

Check out the Cookport and Oxhill Fairs, too!