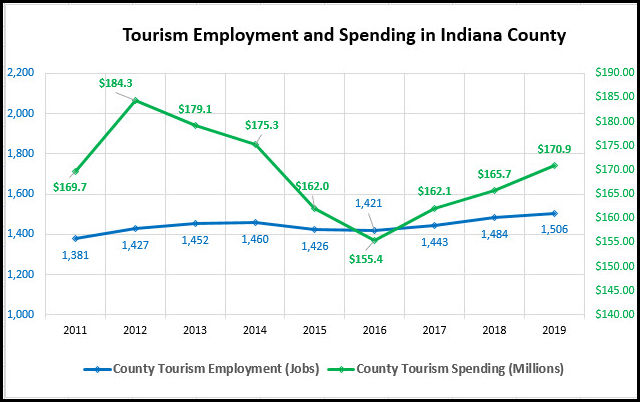 An economic impact study on tourism published in 2019 by the Commonwealth of Pennsylvania reported that tourism spending in Indiana County amounted to $170.9 million in 2019 and accounted for nearly 2,000 jobs countywide. The report also showed that tourism employment in Indiana County has increased 11% since 2009, while tourism spending has increased approximately 15% in the same period.

Those figures reflect the direct sales to travelers at lodging establishments, restaurants, souvenir shops, gas stations, recreation and entertainment venues, museums, and the like. The report indicated that 20.1% of the $170.9 million in traveler spending in Indiana County was attributed to lodging. Traveler spending for other categories was 44% for food and beverage, 29.9% for retail, 30.2% for recreation and entertainment venues, and 46.7% for transportation.  (See Tourism Spending chart for dollar values.)

In addition to direct sales, the report also captured various other indirect impacts attributed to the businesses that supply the direct vendors, such as restaurant food suppliers and hotel laundry services. The combined economic impact from direct and indirect sources was $181.6 million in 2019.  And with the additional impacts of labor income and Federal, State, and local taxes incorporated into the equation, the total tourism impact in Indiana County, amounted to $292.6 million in 2019.

The Tourism Industry and Job Creation

According to the Commonwealth’s report, tourism has generated 159 new jobs in Indiana County since 2009 – an average of about 16 new jobs each year.  Whereas the Jimmy Stewart Museum, outdoor recreation, IUP academics/athletics, and the Smicksburg Amish community are mainstays for local tourism, the Kovalchick Convention and Athletic Complex (KCAC) has had considerable impact on tourism attraction over the past several years and the growth in jobs within the tourism industry.

The report also provided economic impact data for each of Pennsylvania’s eleven tourism regions. Indiana County is one of eight counties in the Pittsburgh region, which is among the top three strongest tourism regions across the State. Collectively, tourism within the “Pittsburgh and Its Countryside” region supported nearly 60,000 jobs and generated over $8.7 billion in direct spending in 2019. With the additional impacts of indirect and induced spending, the total tourism impact for the region was almost $9.3 billion.

On a Statewide basis, direct travel and tourism spending amounted to $46.0 billion in 2019, and accounted for 333,100 private sector jobs across the Commonwealth. Although travel and tourism do not have an official “industry code” similar to the way manufacturing, retail trade, or construction do, the employment attributed to the tourism industry ranks it among the top 10 industries in terms of the numbers of jobs it supports. Across the Commonwealth, tourism generates the equivalent of 4.8% of the State’s economy.

For more information on tourism and the economy or general inquiries about tourism in Indiana County, visit the Indiana County Tourist Bureau.