WCCC Cuts The Ribbon On New Center In White Township

“This day has been long awaited to celebrate this new state-of-the-art facility and all that it offers with quality educational programs and workforce development skills training,” said Dr. William Kerr, chairman of the WCCC Board of Trustees.

WCCC has conducted classes in Indiana County since April 2000, when it first utilized various high schools in the county as well as the technology center, before moving to a former Pennsylvania State Police barracks near the Indiana County/Jimmy Stewart Airport.

The site did not offer adequate space to house science labs — nor was it near the IndiGO (Indiana County Transit Authority) bus lines so, WCCC President Dr. Tuesday Stanley told those gathered for Thursday’s ceremony, “maybe six years ago we had a meeting” at the Airport Road center and started planning for a center that has state-of-the-art classrooms and labs for computers, biology, chemistry, phlebotomy and nursing.

“A whole lot of people had a whole lot of reasons to walk away from this,” said former state Rep. Dave Reed of Indiana, now an executive with First Commonwealth Bank.

“It went through many hurdles, many obstacles,” said state Sen. Joe Pittman, R-Indiana, whose district includes WCCC campuses in White Township and in New Kensington. WCCC also has centers in Youngwood, Murrysville, Latrobe and Uniontown.

“It is truly a blessing when a vision becomes a reality,” said state Rep. Jim Struzzi, R-Indiana.

“I am proud to have been a very small part of this project,” said former state Sen. Don White, R-Indiana.

“We wouldn’t be here if you hadn’t helped us in 2000,” Stanley told the former senator.

“It is nice to see everyone working toward the same, ultimate goal,” Westmoreland County Board of Commissioners Chairman Sean Kertes said. “Regionally, we all have the same issues.”

“In western Pennsylvania we have grit, and we get things done,” Indiana County Commissioner Sherene Hess said.

She also quoted Nelson Mandela: “Education is the most powerful weapon you can use to change the world.”

Indiana County Commissioner Robin A. Gorman said some issues are statewide in nature, including “eds and meds.”

Gorman formerly was executive assistant to IUP President Dr. Michael A. Driscoll, who was in Alaska and could not attend.

She also lauded Stanley, saying “she commanded my admiration and my respect from the first day we met.” The WCCC president said she felt the same about Gorman.

“This project was very special to me as it allowed for me to seek community growth in my servant role as both a former Indiana Area School District administrator and Indiana County commissioner,” retired commissioner Rodney Ruddock said in a message read by Indiana County Office of Planning & Development Executive Director Byron G. Stauffer Jr. Ruddock was in Florida helping his son deal with the remnants of Hurricane Ian and could not attend. 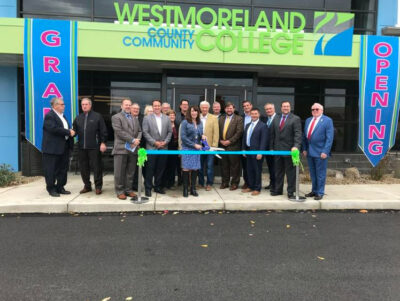 Included is an advanced manufacturing laboratory, a product of a rare collaboration — a community college with the Massachusetts Institute of Technology.

In 2019, WCCC agreed to collaborate with MIT and Carnegie Mellon University’s Advanced Robotics for Manufacturing to expand its Advanced Manufacturing and Robotics curriculum, utilizing a $1.8 million Manufacturing Engineering Education Program grant from the Office of Naval Research.

“We will put Westmoreland, Indiana and Fayette counties on the map with that,” Stanley said.

“The economic progress as a region depends on the progress in education — building on successful partnerships and providing expanded learning opportunities in education and workforce skills training,” said Kerr, who has been on the WCCC Board of Trustees for five years and is in his first year as its chairman.

One partnership of recent note is a cybersecurity link between Indiana University of Pennsylvania, WCCC and other area community colleges, that was bolstered with the announcement two weeks ago that IUP is getting $4.98 million from the U.S. Department of Defense for the first three years of what is termed a novel project to enhance cybersecurity and STEM (science, technology, engineering and mathematics) education in Pennsylvania.

Eventually, IUP may draw $11 million from the DOD, in what already is the largest grant ever awarded to the regional state-owned university. The university said IUP has partnership agreements with all of these colleges and dual admission agreements with WCCC.

Kerr said there is much hope and promise for things yet to come as his college builds on “our successful partnership” with IUP “to increase our graduates in cybersecurity through a seamless admissions and credit transfer process.”

Indiana County Board of Commissioners Chairman R. Michael Keith said “I actually think this is one of Byron’s jewels.”

But Stauffer focused on the words of another commissioner with whom he worked.

Kerr lauded “key stakeholders” at WCCC, including Indiana County Director Jennifer Eckels “and her staff who have contributed greatly to the vision, strategic planning and implementation of this state-of-the-art education and training Center.”